After a stopover in Dubai I arrived in the late afternoon in Dhaka. I was welcomed inside the airport by a guide, who showed me to the driver who brought me to the Tulip hotel. Watching the hectic Dhaka traffic from the back of a comfortable minibus I arrived at the hotel later in the afternoon. All perfectly organised by Worldfish and Meezanur Rahman (who is actually an alumnus, at masters and PhD level, of Ghent University). He is a busy person, so he organised a busy schedule for me!

The next morning, we (Meezanur and I) headed together to the national airport to take a flight to Cox’s Bazar, an area where many Penaeus monodon hatcheries are located. After dropping our luggage at a local hotel, we went on to visit two hatcheries. The MKA hatchery is developing a new niche in the postlarvae market for tiger shrimp. They import specific pathogen-free monodon from Hawaii and grow them to adults in a high biosecurity environment. Adults are kept in maturation tanks (females and males apart) in a recirculation system (protein skimmer; UV disinfection) (See figure 1). Females are inseminated and then put individually in spawning tanks. By standard operation procedure (SOP), but with a strong eye for biosecurity, PL are produced. They catch a considerably higher price in the PL market. 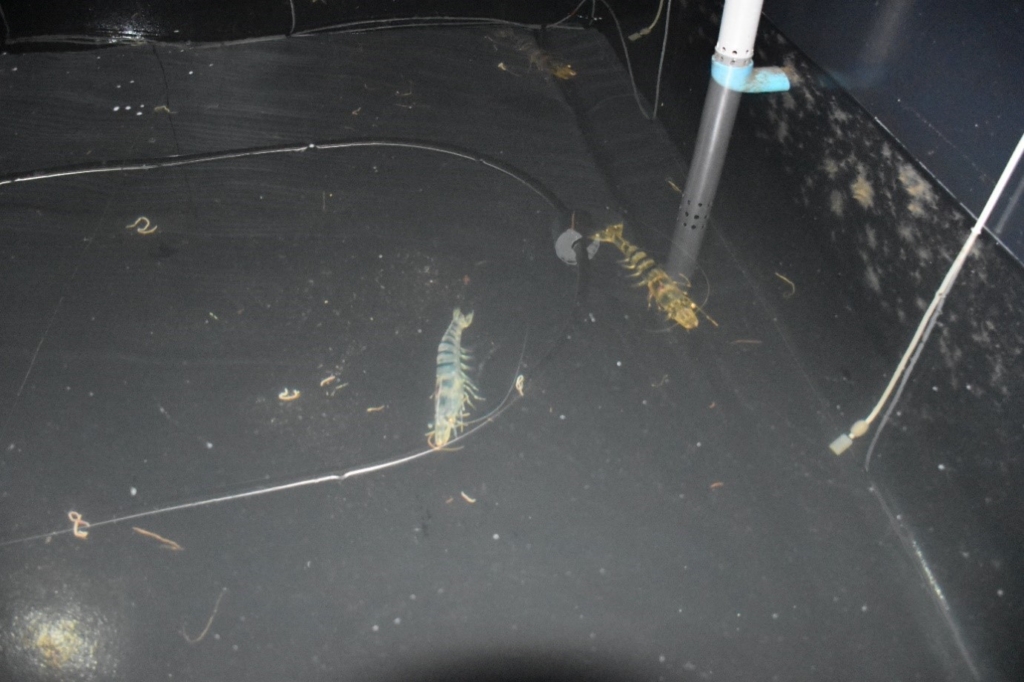 Then we went to visit the second hatchery with longstanding tradition. Here broodstock from the wild is still used. We could visit the hatchery and stopped at the blackboard displaying their SOP (See figure 2). During the visit and afterwards we had a lengthy discussion about microbial community management in the hatchery, with a special focus on the use of commercial probiotics (and the use or non-use of antibiotics; it turns out that managers feel that at certain points during the production process the use of antibiotics is still considered to be helpful). Many probiotics are apparently being used as well. It is not always clear (from a scientific viewpoint) what the additional value is of using many different commercial probiotics. I had the feeling there was ample room for optimisation. The possibility of isolating and applying local probiotics was discussed. Driving all along the Cox’ Bazar long coast we arrived back at the hotel. A local dinner and a whisky on the rock closed my first day visit to Bangladesh. 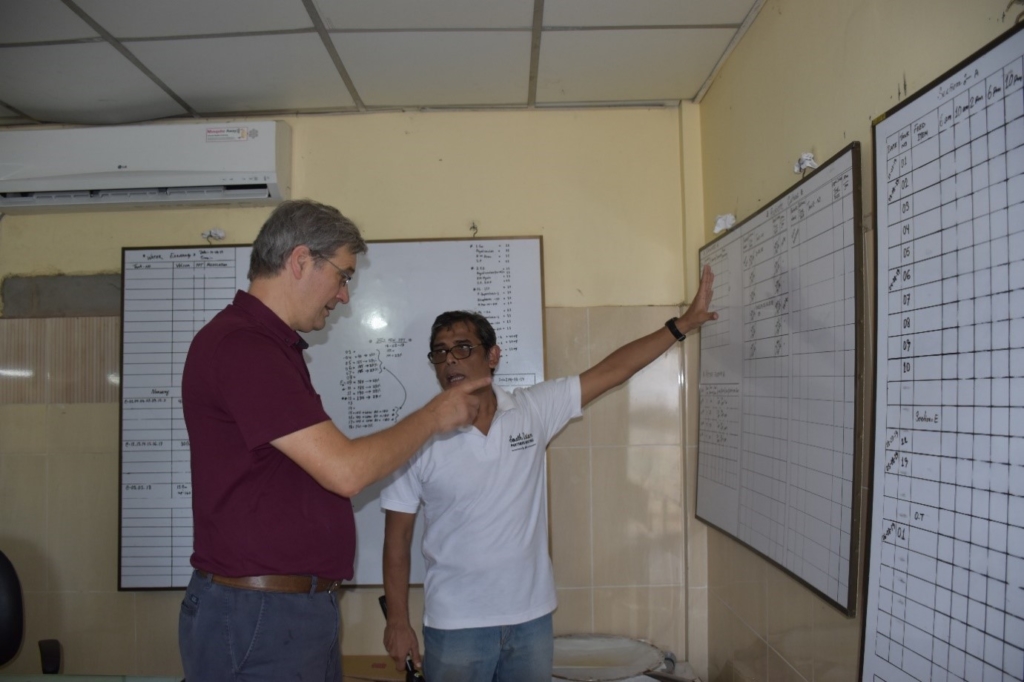 The next day, I was invited to a workshop on hatchery management (within the framework of the SAFETI project) organised by WINROCK, USDA and Worldfish (See figure 3 for picture of the participants, participants list available). I gave a presentation on Ghent University results on microbial community management. The presentation included issues on, for example, the importance of microbial biomass loading rate, probiotics and novel in vivo procedures to speed up screening for local probiotic strains and novel finding on the management of the vibrio-based disease AHPND. The presentation was attended by representatives of the two hatcheries visited the day before and WINROCK managers. We had lively discussions, trying to match research findings at Ghent University with the daily routine in Bangla hatcheries. After lunch we hit the airport back to Dhaka. 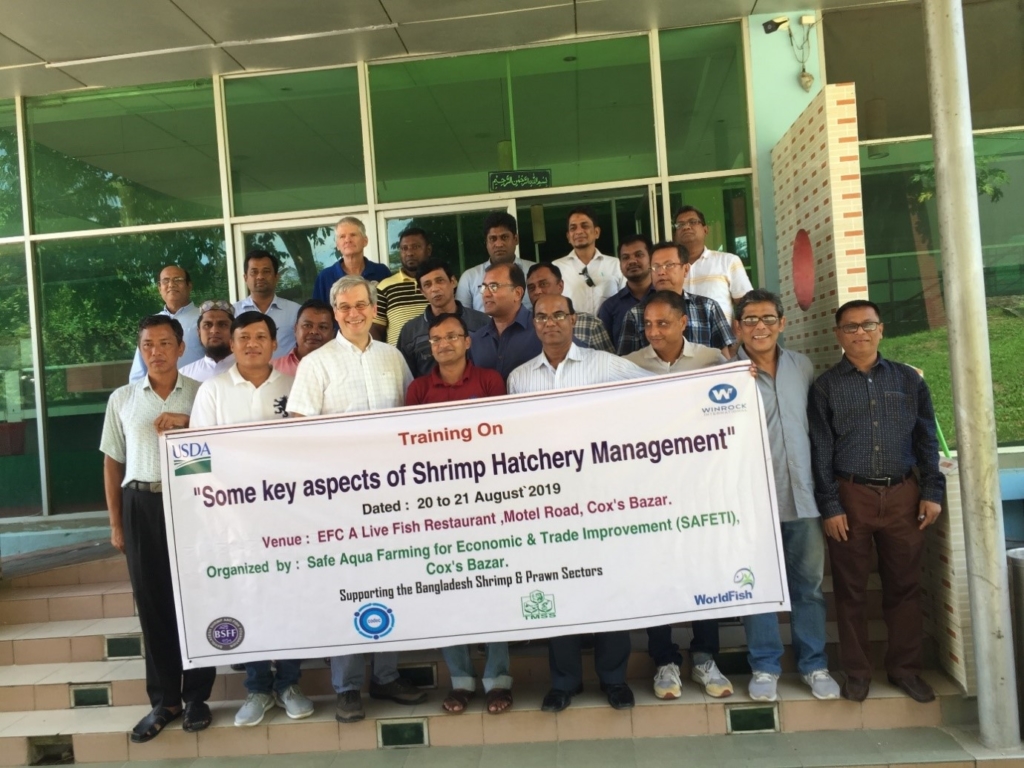 Figure 3: Day 2: Participants at a workshop for the shrimp sector organised by WINROCK (NGO) and USDA and Worldfish

The following day Meezanur from Worldfish had organised within the framework of BATiP (Bangladesh aquaculture technology and innovation platform, EURASTiP project) a workshop for the academic sector at Tulip hotel in Dhaka, on microbial community management. He had invited professors and scientists from many universities in Bangladesh. Many people attended (See figure 4 for picture of participants from at least 6 universities, participant list available), including WINROCK representative and the Bangladesh Worldfish director Chris Price. Also, there were aquaculture association representatives present. It was also a very great pleasure to welcome nine alumni of Ghent University (most of them have studied at the Aquaculture master programme) (See figure 5). 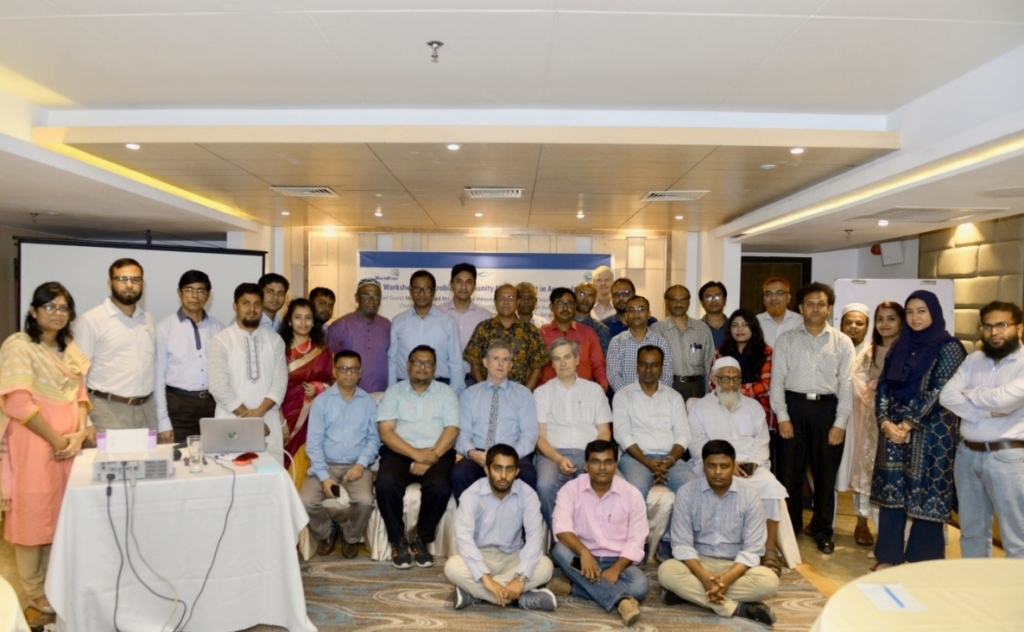 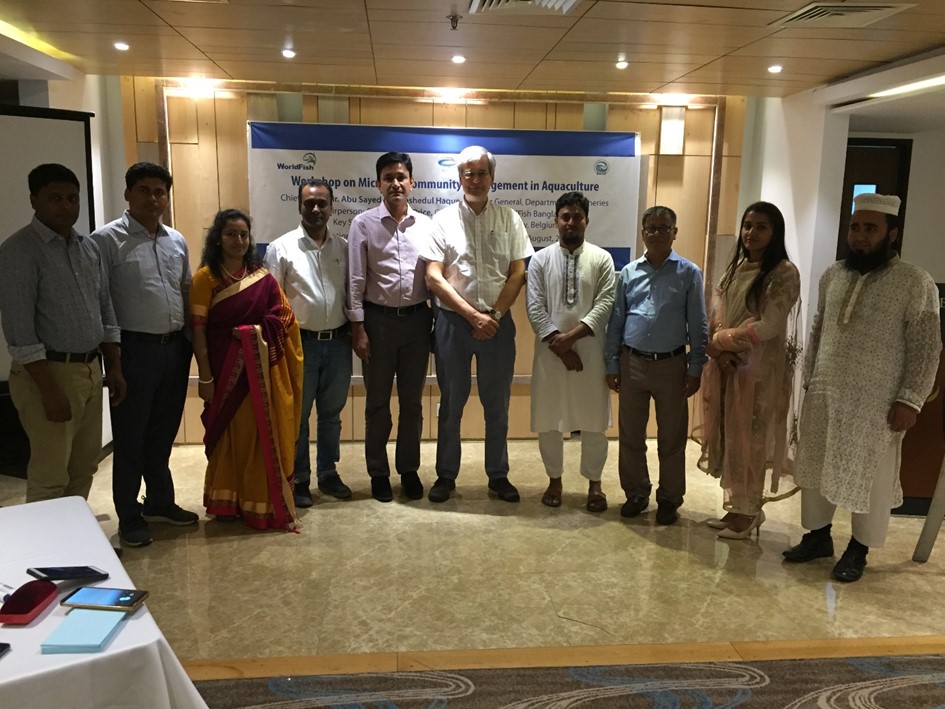 Figure 5: Day 3: Ghent University alumni participating at the workshop organised by Worldfish (Tulip hotel) (what a pleasure and an honour)

After a seminar presentation, Meezanur organised the participants into three working groups. The relevance for Bangladesh, of the information presented, was discussed. The outcomes were presented by the reporters of the three groups. Ideas that could benefit Bangladesh aquaculture in the short- and long- term were listed and discussed. The seminar became very lively. Issues were further discussed over lunch at the hotel. Especially the activity of commercial probiotics and how farmers could get access to unbiased information on their activity and applicability were discussed. 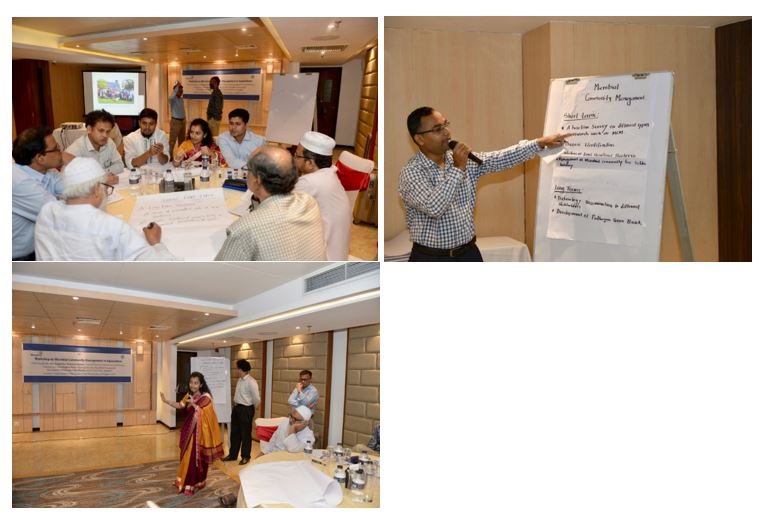 Figure 6(a,b&c): Roundtable discussions, feedback from groups on discussions of microbial community management and its relevance for the Bangladesh aquaculture sector for the short- and long-term.

After lunch we headed for the airport. The next destination was Dinajpur, more in particular HSTU (Hajee Mohammad Danesh Science & Technology University). At the airport we were welcomed by a HSTU delegation headed by Professor Imran Parvez, who visited Ghent University on a EURASTiP exchange visit earlier this year. We arrived at the VIP guesthouse after a 45-minute drive. On the way I closed my eyes, not only because I was a bit tired, but also to avoid watching the complicated driving style, characterised by an intense mixture of people moving forward at different speed on different vehicles. Yet an experienced driver brought us safely to our destination. After dinner and the regular cleaning up of the email inbox, I went to sleep.

Next day I had a meeting with the Vice Chancellor of the University. We discussed the possibilities of student exchange with Europe and Ghent University in particular (funding is the limiting factor, as usual). I then gave a keynote speech at the specially organised seminar on Microbial Community Management (MCM) in Aquaculture, which was attended by lecturers and students (both bachelor and masters). After this, we held a discussion forum with local masters and PhD students (See figure 7). A big audience at HSTU. In the evening it was back to Dhaka.

The next day we travelled to Sylhet, I was accompanied by Shabuj Bhai from Worldfish, as Meezanur had gone with a Bangla delegation to visit Thailand and Vietnam for the EURASTiP Brokerage event. We arrived at lunch. In Sylhet the first international conference on sustainable fisheries was being organised by the Sylhet Agricultural University. But, first, we went to Shahjalal University of Science and Technology (SUST). Professor Faruque Miah (who has a masters from Ghent University) had organised a seminar for students of the Fisheries Department. Close to 100 students attended the seminar on microbial community management. 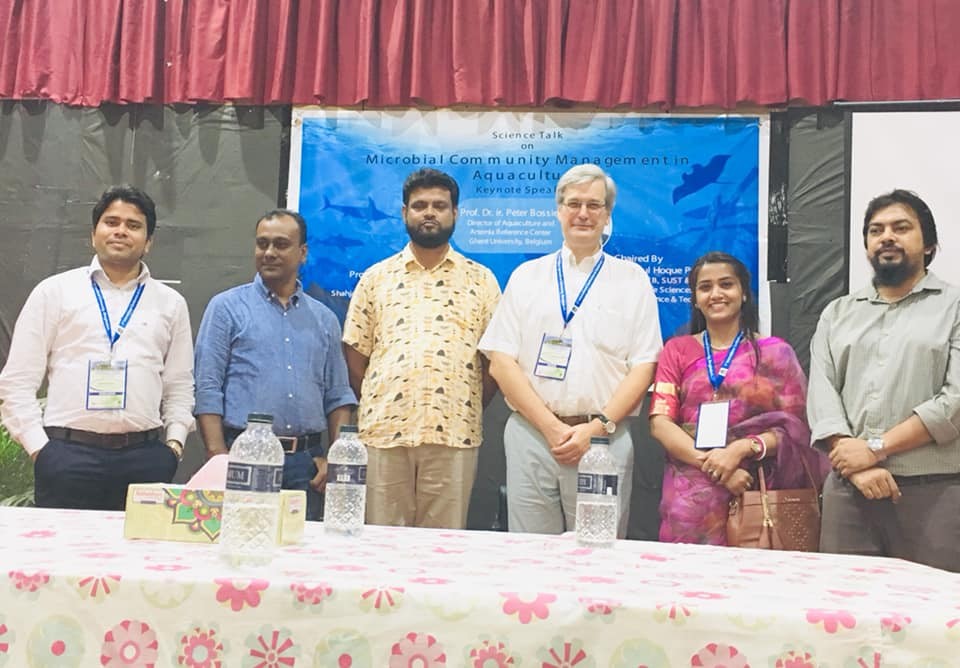 After a night’s rest at the guesthouse of Sylhet Agricultural University, I was picked up to head for the conference, where I was asked to chair a session on Fisheries and the blue economy. In addition, by a last-minute change of the programme I gave a short presentation on Health management in Aquaculture. The contact with the organisers of the conference was facilitated by the fact that Sylhet Agricultural University has Ugent alumni. So, it was also very pleasant and interesting to meet them again. In the afternoon was sat together returning to Dhaka. 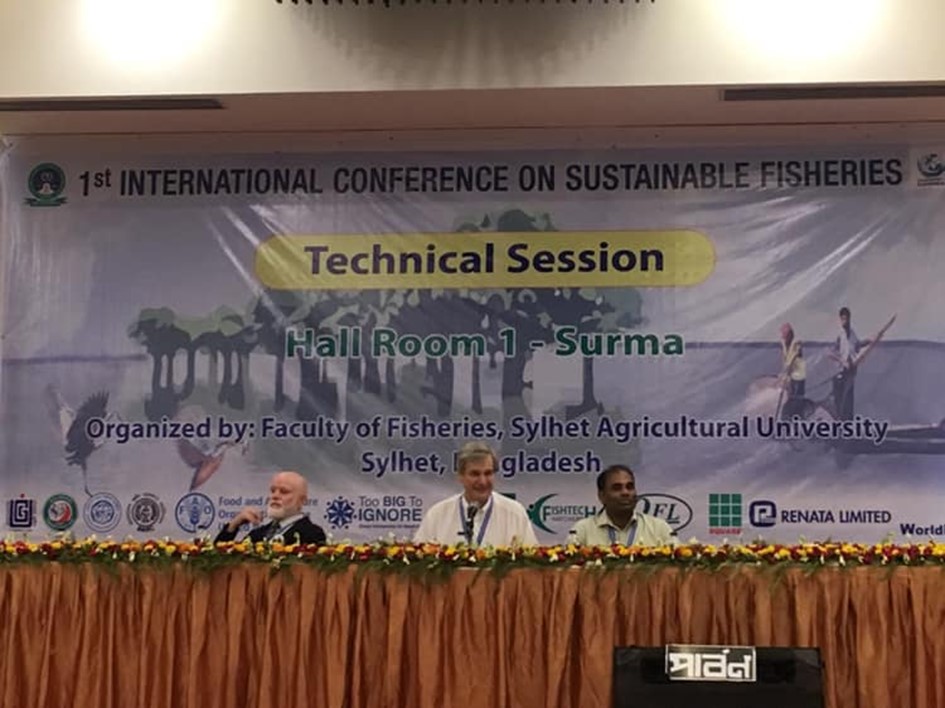 On the last day of my stay in Bangladesh I was invited to Dhaka Agricultural University, as a return visit by Dr Mohammad Shamsur RAHMAN, who visited Ghent University on an EURASTiP exchange earlier within the framework of the project. This time Kaniz-Fatema-Tuz-Zahura and Shabuj Bhai (both from Worldfish) joined me. After a tea session (always very relaxing!) I was invited to give a lecture to the student of the faculty of Fisheries (See figure 10). I had agreed with Dr Mohammad Shamsur RAHMAN and also according to the proposal I had submitted to EURASTIP to make it an interactive lecture. After some introduction on some of the principals of microbial community management (mainly microbial biomass substrate loading rate per hour), I used classroom pooling over the internet (Mentimeter free software) to check their current knowledge in an anonymous way. That worked better, as there was little response from the classroom on my previous questions (put in a classical way). The result of the pool was, in a way, interesting as nobody came up with the correct answer (yet using the tool as such went very smooth, while they were not familiar with this way of teaching). This fact was breaking the ice. From that point onwards “shame” to be communicative in front of their colleagues was gradually fading away. As a final interactive event I discussed with them the optima position of ozone disinfection in a recirculation system (this in view of the introduction on microbial biomass substrate loading rate per hour) I could convince them to come up to the blackboard, allowing to explain their opinion. Classroom discussion was on its way. Apparently, they liked to whole idea as this was the first time that teaching was brought to them in this way. 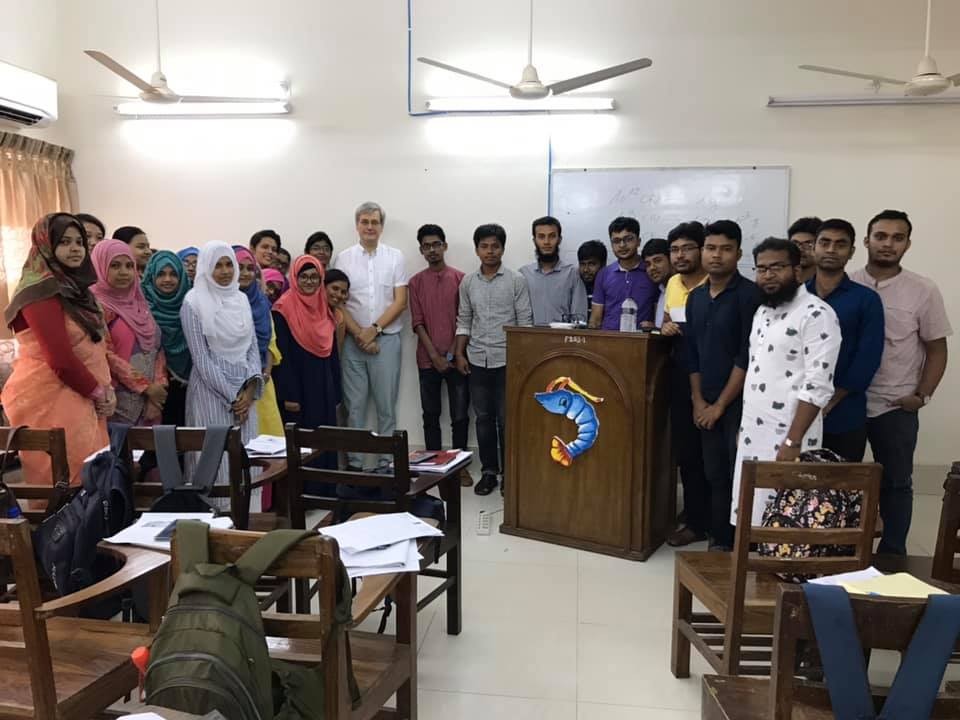 After the lecture we went to visit the Vice Chancellor of the University. It was a short but very interesting discussion over tea, we talked about collaboration but also about the validity of global university ranking systems (See figure 11). 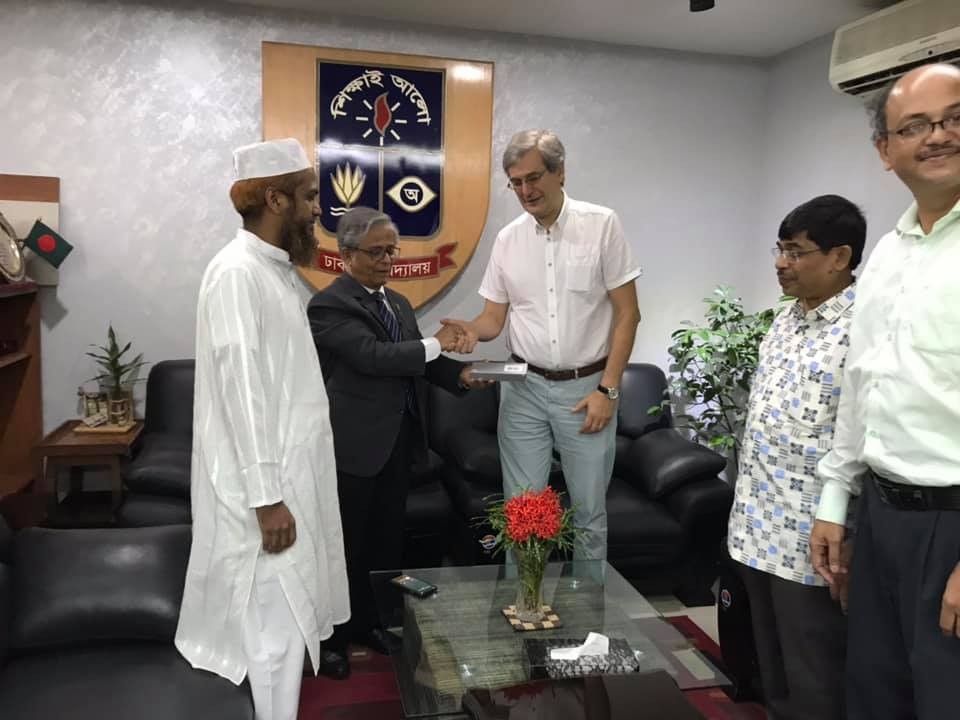 Figure 11: Meeting with the Vice Chancellor of Dhaka University

In the afternoon a seminar on Health Management in Aquaculture was planned for student and staff. I spoke about different content than the morning’s class, for example, explaining our results on transgenerational epigenetics and its possible application in aquaculture. I had a big audience (up to 100 people) and we took many pictures (an unavoidable ritual in Bangladesh). This was the last activity in Bangladesh. I was brought back to the hotel and as a surprise I met Yossa Rodrigue there. He is a Ghent University alumnus from Cameroon, yet now working in Penang for Worldfish. We had dinner together and a nice chat about collaboration between Ghent University and Worldfish. Finally, it was back to the international airport, to start the journey to go home. It was a very intense but fruitful trip. Worldfish brought me in contact with almost the complete aquaculture community of Bangladesh (academic and private sector) allowing me to get to know them, and also allowing me to introduce the research at Ghent University. THANKS! 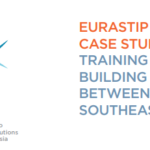 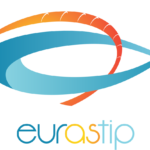